I didn't wanna write this, but at the request of @Rowley286 here we go. On august 13th I paid Rowley for some parts listed as a crazy deal. It was a great deal had a bunch of parts one of which was a Cold Fusion Ebox setup with one season old components and a msd enhancer. There where pics of everything but the ebox in his add. I asked him about the condition before I paid and he confirmed it was in great condition..
A week went by no tracking yet so I contacted Rowley and asked for a tracking #, he got back to me within a day saying he sent it slow boat and he would send tracking. Never got a tracking # but I did get a package after another week passed!
Opened the package the following day cool everything looked good except you could not see into the coldfusion box, kinda weird because isn't that the point of having a see thru cover? I pulled off the cover to find that the voltage regulator wiring was burnt up and some off the other wiring as well. Looked like a small fire had taken place.

I contacted Rowley about it and he got back to me swearing it was running when he pulled it and that he would buy it back. Saying he could easily sell two parts for what he sold me the entire package. I just didn't feel good about the deal after that and sent him a message saying I will take him up on his offer and return it if he could just refund my money+shipping it would be on its way in the morning. He read that message and never responded back until this morning in another thread I started just trying to reach out to him instead of writing negative feedback. http://www.x-h2o.com/index.php?threads/anyone-know-rowley286.185451/#post-1949882

I posted a lot of the items for sale that I got in that package. It was clear he was not refunding my money and I wasn't gonna ship back the package and hope for the best when it arrived giving the circumstances.

Pics and screenshots of the transaction 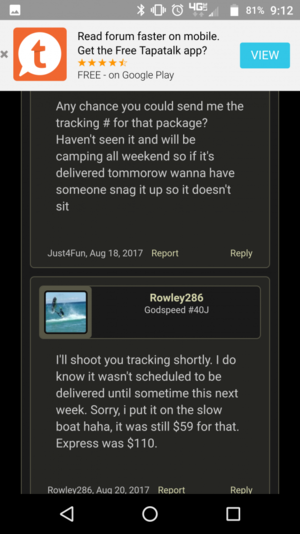